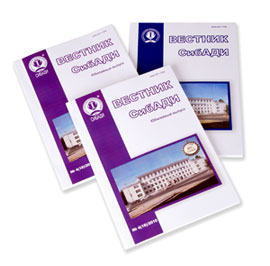 The journal is designed to inform the scientific community about innovations developments of academics, postgraduate students and students of SibADI and other university’s scientists. The pages of our collection are open for all authors, who are seriously engaged in research.

We shall be pleased if on the website you find answers to your questions and obtain useful information.

We are looking forward to your questions and comments on our materials and the website!

The journal was established in 2004 and has become well known to the wide audience of scientists and specialists – experts.

Since 2009,  “Vestnik SibADI” is included to the Ulrich’s Periodicals Directory (Bowker publishing house), which is the world leading provider of bibliographic information in all spheres; is presented in scientific and electronic library eLIBRARY.RU; included in the Russian Science Citation Index; since  2011 – in the list of the Russian peer-reviewed scientific journals, recommended by  Higher Attestation Commission (HAC).

Since December 12, 2015 the journal is included in the new list of peer-reviewed and scientific publications of HAC in accordance with the requirements of the decree of Russian Ministry of education and science from July 25, 2014 No.793.

The journal is a periodical scientific publication, registered as a mass media. The certificate of the mass media registration ПИ No. ФС 77-50593 dated July 11, 2012, issued by the Federal Service for Supervision in the Sphere of Mass Communication, Communications and Protection of Cultural Heritage. “Vestnik SibADI” is regularly published since 2008 – 4 issues per year, since 2012 –  6 issues per year. The journal has the ISSN 2071-7296.

Quality control and keeping high standards of scientific excellence are provided by the current review system with involving leading scientists from basic industries, representing various universities and scientific organizations. The manuscripts received are sent to an internal and external reviewer.

The editorial board carries out an expert evaluation, reviewing and checking articles for plagiarism.